We are currently experiencing higher than normal call volumes. For faster assistance, we recommend emailing us at info@winterparklibrary.org. If we are unable to answer your call, staff will attempt to return your call within 48 hours. Thank you for your understanding.

On June 8-9, 2016, the Aspen Institute hosted two events to advance new thinking about the role of the public library in the city of Winter Park, Florida.

The first event, a public forum held at the local University Club, featured keynote speakers Richard Adler, president of People & Technology and distinguished fellow at the Institute for the Future, and John Bracken, vice president for media innovation at the John S. and James L. Knight Foundation. Their complementary presentations placed libraries within the context of a constantly and exponentially changing environment. 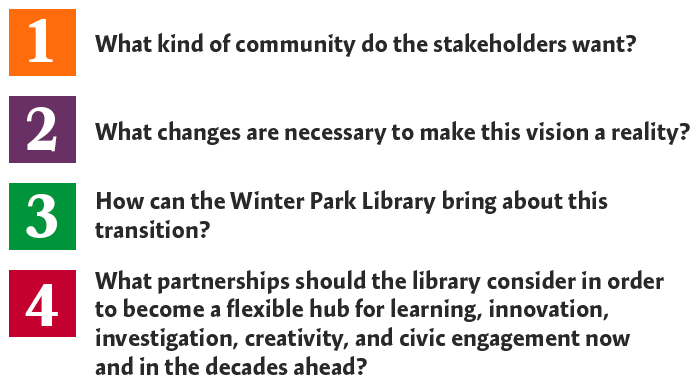 The Winter Park roundtable is the first in a series of five Aspen Institute dialogues to be held nationwide in 2016-2017. Taking place in communities of different sizes and with libraries of various types, the dialogues' purpose is to reimagine the institution that Andrew Carnegie once described as outranking "any other one thing a community can do to benefit its people." Each dialogue is based on the framework presented in the Aspen Institute's October 2014 report Rising to the Challenge: Re-Envisioning Public Libraries.